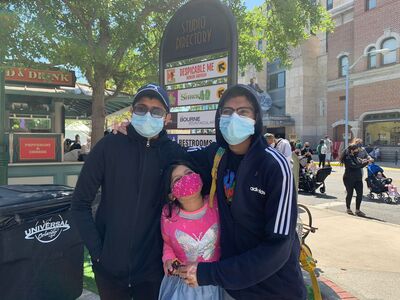 My trip to Universal Studios was very interesting. It started off as a quick weekend in Florida, mainly for my dad to meet up with a few clients. After watching TikTok at the airport I kept wondering what we’d do on our weekend in Florida. I’ve already been to Disney World, and two days would not be enough time to see the entire place. That’s when it hit me, Universal studios!

I remember my friends telling me about universal back when we were kids, and being one park, a day would be plenty of time to explore the entire place. That’s where our journey began! At 6 am Saturday we landed in Orlando, and immediately rented a car straight from the airport to Universal Studios. The Line was extremely long, so entering the parking garage took way longer than expected. Around 9 am was when we reached the entrance of Universal, taking pictures by the giant globe at the front of the park. We took our vaccination cards and tickets and headed straight through the gates.

Knowing our love for food, my family and I headed straight to Mel’s Diner! We ordered their world-famous milkshakes and veggie burgers, tasty was an understatement. After our breakfast, we headed to our first attraction, the wizarding world of Harry Potter! Being a harry potter fan, I enjoyed the ride and architecture! It felt like I was a wizard at Hogwarts. We Then took the Hogwarts Express from one side of the park to the other. This was unlike anything I’ve ever been on! What seemed like a normal train ride, turned into a crazy movie! First, the windows fogged up, creating a screen to project characters. Then an evil storyline with Harry Potter was showcased along the windows making us feel like we were trapped in the train! Now I’ve been on trains all over the world, but this had to have been my favorite!

There were a lot of rides at Universal, but if I had to list my favorite ride it would be the Revenge of the Mummy! This ride was by far my favorite at universal studios because of how exhilarating and adrenaline-pumping it was. Scary mummies, flames, and death drops definitely made the ride worth the hour-long wait! I also bought an autograph book from a street vendor for 5$. As my family waited in line I went around the park looking for special characters like Spiderman or even Homer Simpson! I ended up finding Bart Simpson after an hour-long walk, and then took a couple of pictures with Woody Woodpecker! Let’s just say that my autograph book is worth a fortune now! We wrapped up our day by heading to other rides and attractions. I didn’t enjoy them as much as the Hogwarts Express and the Revenge of the Mummy.

Then the worst part came, finding our car! We left at 6 pm and didn’t find out car till 10! Whose idea was it to not take a picture of our parking spot! Note to self, use anything you can to remember where you parked your car, otherwise, you’ll spend more time waiting outside the park than inside. After a long day of excitement, we headed to our hotel and called it a day!