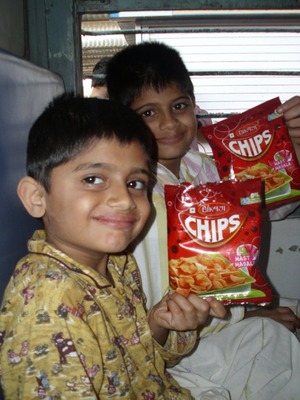 Hello! I am Hussain, sending you greetings from Mumbai, India. My older brother Hassan and I have been travelling to many places, and I wanted to tell you about our time in Mumbai. I am told it is the largest city in India. They speak so many languages in this city. We often need interpreters. There are areas that seem modern and others that are old fashioned. They have many trains, and the traffic is busy and we had to be driven everywhere.

My favorite thing to do in the city was going to Juhu Beach. They have a Ferris Wheel and other rides, like horse carriages. People don’t swim at the beach, but they have a park and statue. You can ride a camel there! They also have dancing monkeys. It feels like going to a fair.

There are many tourists in Mumbai, rich people and a lot of very poor people. They come from all over Europe and Africa, too. Did you know that they used to call this city Bombay? India used to be part of the British Empire, and that’s what it was called back then. There are many western buildings left from those days.

Another place we saw was the Phoenix Mills. It’s a very large shopping mall with all kinds of restaurants. Hasan liked eating an Indian dish called Biryani which is made with rice and meat and spices. My favorite food in Mumbai was the Kulfi. It’s an ice-cream dessert with fruit. I liked the strawberry kind. We ate Dosa which is a pancake bread that had spices. There were other restaurants from the US and other countries as well. It is a city with many kinds of people.