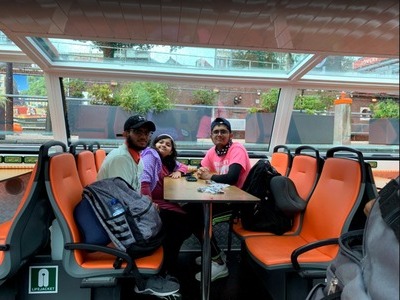 Last fall my family and I took a trip to Europe via KLM. For those of you who don’t know, KLM is the international airline for Amsterdam. My family and I happened to have a 7-hour layover in Amsterdam, so what better way to spend those hours than in the city? Our flight from Houston, Texas landed in Amsterdam, the Netherlands at about 6 am CET. This meant that we had all morning to relax and enjoy the beauty of this city. With only 7 hours on the clock, we knew we had to move fast to view as much as we could of the city.

From the airport, we bought 5 tickets for the local train which would take us to the center of the city and back to the airport. The train was one of the best trains I had ever been on. The cleanliness, comfortable seats, and giant windows really enhanced the experience. The beautiful views of the city’s skyline and the clear blue skies were truly a sight to see.

Our first stop was the center of the city, where we took a boat tour through the canals of Amsterdam. The boat was giant with windows above, behind, to the side, and below us. We followed down the canals while seeing so many amazing things such as irregular buildings glued together, and boathouses that seemed awesome. My favorite part of the boat ride was getting to hear the pre-recorded audio of the tour guide and follow along as we rowed past the most historical buildings in the city.

After an amazing boat ride, my hungry family decided to stop at a local authentic dutch restaurant for breakfast. To keep ourselves from overeating, we decided to just try the traditional slices of bread with appelstroop and jelly, along with a side of black coffee. Although simple, this meal was delicious, light, and aromatic. Dutch breakfast is definitely one to try!

After our meal, we decided to purchase tickets for the 11 am bus tour, which would take us to other historical and traditional buildings in the city. We started at the bus station and made a total of 6 stops before returning. Our first stop was the Van Gogh museum. Home to some of the best paintings in the world, this art museum was unlike any other museum I’d ever been to before. The architecture and cultural atmosphere contributed to an amazing tour.  Our second stop was at Vondelpark. A peaceful, green park that was filled with families, children, pets, and a great vibe. After that, we stopped by the Jordaan neighborhood, the Red Light District, and the Oude Kerk. These were amazing places that stood out and made the city an amazing place.

Our final trip on the tour was the A’DAM tower, a 22 story building with incredible views of the city. As we got to the top of the building we could see everything in the distance, from the old buildings to the new factories, this view was one that we couldn’t have missed. Amsterdam is a great city with history, architecture, and culture everywhere you go. I would definitely see myself coming back here again soon.